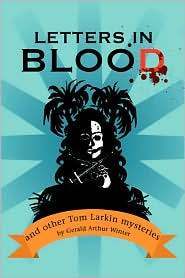 Tom Larkin paid fifty grand for his brilliant red casket months before they planned a sailor’s funeral for him that night. His coffin cruised at 120 mph with its dash lit like a jet’s cockpit, where the most important reading to Larkin glowed on his Porsche’s digital clock--4:00 AM. Perhaps it was his darkest moment before dawn, but he had other plans. He drove recklessly, hydroplaning northbound on Manhattan’s flooded FDR Drive through sheets of pouring rain.

The drive home took an hour, but, with minimal visibility in a torrential downpour, the flooded Harlem River Drive leading to the George Washington Bridge concealed potholes rattling the fine suspension of his German-made wet dream. Larkin’s greater problem—DWI—was a given they had counted on. Still, they drugged his last sour mash at Rao’s, just to up the prelude’s tempo to an evening dirge.

With the bad weather, his inebriation, and hallucinations from a subtle drug taking hold of his senses, the distance between Larkin and home lengthened as time became his enemy. Vera, his wife, told him she’d kill him the next time he stumbled in after daybreak. It was no idle threat. He knew she could kill in a crime of passion, especially him.

Death lurked at the start and finish of his race homeward, but with two strikes against him, only he could fathom the third--his bent to self- destruction.

If all went as planned, Harbor Police would find Tom Larkin dead behind the wheel after hitting the muddy bottom of the East River, or any other river. They just wanted him gone, stateside or overseas, no matter what.

Larkin still felt sharp an hour after downing his third double Jack Daniels. In his mind, past, present, and future were clear. Remembering his hat size, Social Security number, and the measurements of a dozen bimbos was no problem. He could read his driver’s license number from three paces, backward, upside down, with either eye or both—without glasses.

He’d been sharp for two hours before he started driving, but an hour after his last belt, the first drink kicked in with the drugs and compounded his usual buzz. Seeing Vera as more dangerous than the road, he sped recklessly despite the hazardous conditions. He had no idea anyone wanted to kill him for anything other than his flagrant infidelities.

To his right, the black depths of the East River was a fatal attraction. He could be a loser on two counts, but there was a third alternative, the loser’s hat trick--call strike-three without a swat to stay alive. His own worst enemy, he knew they might find him dead before dawn on all three counts.

“Bastards,” he grumbled, cursing his so called buddies who let him get behind the wheel after he had been pumping drinks for hours. Their names escaped him. So much for clarity. Sharp as a rose thorn? he wondered. My ass.

Where were those faceless nonentities? They were friends enough to buy his fourth drink in a dingy saloon, yet, they had turned their backs when he squinted to read the address on his parking stub. Had they callously watched him stumbling to his Porsche trying to get home?

So much for twenty-twenty fucking vision, he thought. Vera will kill me if I’m not out of here. What time you got, Pal? I can’t read my damn watch.”

His mind and car sped out of control at a mile a minute. The East River beckoned. Who could ever see clearly in a dim twilight between Happy Hour and an untimely death?

He shrugged and imagined seeing his own hands clutching the steering wheel but saw no flesh, only bone. In the rearview mirror, he caught the malicious grins of three Mexican capungos, bandits who’d kill as soon as spit.

“Fuck off!” he shouted, shaking their image from his mind. Adjusting the mirror to be sure they were gone, he saw his own reflection as a skeleton and swerved toward the river. More than a nightmare, with new depths of horror, this recurring dream began during his first overseas gig in Guadalajara with the DEA.

“Some wet dream.” He eyed the black river’s treacherous currents, knowing his propensity to let booze make him think with his dick regardless of threats to life and limb. He often relied on his dark sense of humor to carry him home through the mental mire.

Blinding rain pounded against his fogged windshield. The Porsche fish tailed sporadically against the torrents. His reflexes jolted with puddles gushing under the Porsche. Every wave jerked the steering wheel from his hands. Clenching his jaw, he felt his neck knotting. He needed a smoke, but that had to wait till he got home to Vera. How many hours of their volatile marriage had he spent trying to get home to her? How few had he actually spent with her?

Tom Larkin presents the next generation of in-your-face detective stor-
ies, complete with fast-paced action and plenty of cleavage. PI Tom Larkin is a retired DEA agent who is both hero and loose canon. Flashbacks and murky dream sequences introduce Larkin’s world. Frequent DEA business trips, hard drinking, and sleazy affairs end the strained relationship between Larkin and his wife, Vera. Shortly after their breakup, Larkin is sent on an assignment to Bangkok, where he drowns his sorrows in whiskey and sex. When Vera and two of her co-workers are brutally murdered, Larkin’s teenaged niece is kidnapped and the DEA training school is bombed killing 39 cadets. Larkin is summoned back to the States. Soon after his return, he’s sent to Jamaica to investigate a drug ring that is suspected of having ties to the murders. He meets Minnie Rabelle, daughter of a powerful Jamaican politician. She is rumored to be the mistress of Guy Jasparre, king pin of a Caribbean narcotics cartel. The sexual tension between Larkin and Minnie builds, as their paths continue to cross. She blackmails Larkin into searching for family papers that will insure her legacy. He battles crooked DEA, CIA, and British Secret Service agents, as well as his own libido, to unearth the documents and solve the murders.

In five concluding short stories, themes encompass tales of a long-missing heiress, who suddenly resurfaces for her cut of the family inheritance; a schedule-oriented femme fatale, who misses her morning taxi; a young girl, who grows up to have an unusual tryst with her uncle; a close friend, who takes a suspicious header off a 13th-floor balcony; and a dubious accident that shakes up a couple’s love nest.